Serving the community with Corrales Fire Department is more than fire hoses and ambulances, especially for one leader. 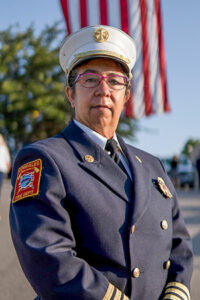 Commander Tanya Lattin, a 25-year veteran of the department, organizes year-around efforts to help local residents with a variety of needs, from collecting Christmas gifts for children to delivering borrowed home medical to senior citizens. Her efforts, supported by the entire department, extend beyond the boundaries of Corrales.

“Their donations, along with those from our other partners at local faith-based organizations, really helped our student families get through tough financial times and supply-chain shortages when COVID-19 was at its peak,” said Beth Pendergrass, RRPS chief communications, strategy and engagement officer. “In addition, the Corrales Fire Department has been a strong supporter of the district by providing assistance with vaccination clinics and so much more. We are grateful for all of our partners within Sandoval County and neighboring jurisdictions.”

Lattin said the department has provided food boxes for local families in December since the 1970s. She joined the department in 1997 and took over as coordinator of the food distribution.

“No one should not know where their next meal comes from,” she said.

A resident asked her why the department didn’t provide presents, home goods and clothing for families in need, too. So, Lattin added Thanksgiving food and Christmas gift distributions starting in 1998.

“Later, we added the giving tree at Village Hall to expand the reach, and village staff wanted to be more involved in helping,” she said.

The department has adopted as many as 60 families for Christmas, with the peak in 2009-10. She saw less need in 2020 because of extra governmental assistance and stimulus payments.

The fire department partners with the Kiwanis Club of Corrales because the club’s 501(c)3 nonprofit status helps.

“Partnering with Kiwanis has been a wonderful endeavor and helped us be able to help more children,” Lattin said. “Holidays are a financial stressor in more ways than just wanting presents for children. Students are home from school, where they may be used to eating both breakfast and lunch; increased heating costs due to cold weather; maybe day care costs or an adult missing work due to kids being home.” 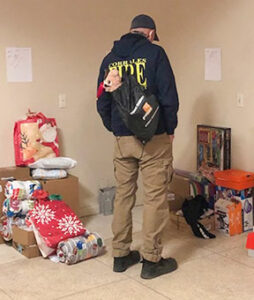 Corrales Fire Chief Anthony Martinez looks over collected Christmas gifts in a past year to make sure no child was missed or had fewer presents than another. He was also helping add small items such as toiletries and stuffed animals. Courtesy of Tanya Lattin.

The more time Lattin and Corrales Fire Chief Anthony Martinez spent in the community, she said, the more they realized people needed help all year. So, Corrales Fire expanded its assistance efforts.

“We definitely do more than just fire and EMS,” she said of Corrales Fire Department. “We want to be part of the community.”

Lattin has collected donations for needs ranging glasses for a student to a year of internet service for a family to furniture discovered via the NextDoor social media platform. Firefighters will even foster pets for patients they transport to the hospital.

“We just really try to make it seamless for citizens to get what they need,” she said.

All of Corrales Fire Department helps with the service. Those activities aren’t in anyone’s job description, but Martinez lets Lattin run the efforts.

She asks fire crews for help here and there, but does most of it herself to keep from overloading the firefighters, who already handle a lot of calls.

“I don’t want to make their day busier,” she said.

The community supports the assistance efforts with donations, from meals for firefighters working at vaccine clinics to warm hats and scarves for anyone who needs them.

For senior citizens with little social contact, she regularly checks on them – by phone or in-person outside for COVID-19 safety.

She also works with a village volunteer group that provides rides for senior citizens and loans out home medical equipment. Many of those volunteers are senior citizens themselves, so during the height of the pandemic, Lattin picked up the equipment, sanitized it and delivered it to the next user to keep anyone from being exposed to the virus.

Firefighters are still collecting and distributing food and baby formula, an effort that started early in the pandemic. Corrales Growers Market vendors bring her their leftover products after the market closes.

She also gives a portion of the food to Corrales Senior Center for the seniors to take home and delivers the rest to residents around the village. Lattin estimated she delivers food to four families a month and drops off anything extra to a fifth family.

“I don’t want families to feel like they’re asking for charity,” she said.

She remembers being young and not financially well off.

She wants families to know she’ll keep their information confidential. Fire crews packing food boxes don’t even know where the donations are going, she said.

The firefighters hold a COVID vaccination clinic every Sunday in Corrales, as well as having helped with clinics in other communities and bringing vaccines to home-bound people in Sandoval and Bernalillo counties.

Corrales Fire also has address signs for houses so emergency medical crews and delivery people – all the more important during the pandemic — can find the right home.

“We just try to make it where people continue to live and thrive in the village,” Lattin said. 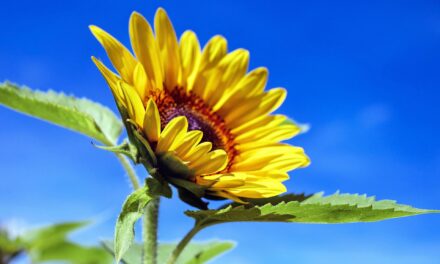