I hope the San Francisco 49ers and Kansas City Chiefs play a great game today in Miami, where Super Bowl LIV (54) kicks off at 4:30.

Once again, I’ve asked some area “experts” for their takes on the big game. I’ve been doing this for at least 18 years in a row, but over the last 10, me and the “experts” really haven’t been outstanding.

Of the five “constants” – me and four coaches and athletic directors – haven’t been very good at this, despite all our knowledge about the game.

Vince Metzgar leads the way at 5-5; Larry Chavez is 4-5; Heath Ridenour is 3-4; I’m 3-7 and Dave Howes is 2-8. Chavez missed the first of this 10-year stretch because Randy Adrian was the A.D. at Cleveland High, while Ridenour missed a few seasons when Kirk Potter was the Storm’s head coach.

But, of course, it’s all in fun. I probably feel the worst: My girlfriend had a 13-game advantage on me when the regular season ended, picking head-to-head, and the seasons I picked Peyton Manning’s team to win (the Indianapolis Colts in 2010, the Broncos in 2014), they lost, and the year I thought Cam Newton and the Carolina Panthers were better than Peyton and the Broncos (2016), I was wrong again.

I’m not sure if it’s better to have a “horse in the race,” such as the case this year, without my second-favorite team, the Patriots, entered. Five times in the past 10 years, I’ve gone with Tom Brady and the Pats – and three times they won.

On the record, I’m going with the Chiefs. Pat Mahomes can make it happen: He runs well and throws pinpoint passes—gotta love tight end Travis Kelce — and his skill players have been awesome and the KC defense has been stout.

Chiefs 37, 49ers 31. MVP: Pat Mahomes. (I went with the Niners the last time they were in it, SB 47, and they lost to Baltimore. I thought Baltimore would be in this year’s Super Bowl and I would have gone with the Ravens, but losing at home to Tennessee doomed that plan.)

Now, read how the other “experts” see today’s game:

Larry Chavez, RRPS athletic director: “My Titans could not stop the Mahomes machine and I don’t think the 49ers can stop them, but they may slow them down a bit.  But stop them, no.” Chiefs 34, 49ers 28. MVP: Tyreek Hill.

State-champion Cleveland High head coach Heath Ridenour: “I am going to pick Kansas City. I think Patrick Mahomes is the difference-maker in this one. I think the 49ers are playing the best and they have been the best all season, but I think Andy Reid solidifies himself as one of the greatest coaches in the NFL and earns the big Super Bowl win. Patrick Mahomes is the MVP. He has a lot of speed at the WR position and he will take advantage of it. He is also going to make some key third-down conversions with his legs. Chiefs 34, 49ers 24.

Rams quarterback Isaiah Chavez, NM’s Gatorade Player of the Year: “I think it’s going to be the 49ers winning the Super Bowl. San Francisco will simply apply too much pressure on the Chiefs’ offense and (the way) San Fran runs off their defense and they play their style of running the ball will top them over the Chiefs.” 49ers 27, Chiefs 21. MVP: Raheem Mostert.

Rams defensive back Junior Hodnett: “I believe the 49ers will win. I don’t think the Chiefs offense will be able to get through the 49ers’ defense; they’ve been going all year – a powerhouse.” 49ers 34, Chiefs 27. MVP: Richard Sherman.

Storm quarterback Jeff Davison: “I’m taking the Chiefs because they find a way to win even if they’re down big, and they have a great coaching staff.” Chiefs 35, 49ers 21. MVP: Pat Mahomes.

Former Lobo and NFL wide receiver Preston Dennard: “Do I have to take my passions out of it? It’s so even in my eyes … gotta go with San Francisco. Defensively, that’s gonna be the difference. Mahomes is gonna play great but I think he’s gonna come up short.” 49ers 31, Chiefs 27. MVP: George Kittle (He’d like to go with the 49ers defense as MVP off a late play that seals it.)

By the way, here’s an interesting tidbit about the game: Raheem Mostert and Damien Williams were cut by the Miami Dolphins – and they’re now the feature backs for the 49ers and Chiefs, respectively, playing in the Super Bowl in Miami. It’s fair to mention the Dolphins have the worst rushing offense in the NFL. 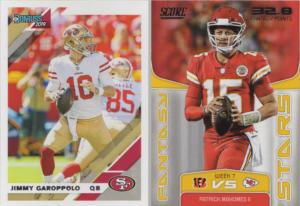 Who leads his team to a win today in Super Bowl LIV? Jimmy or Pat? 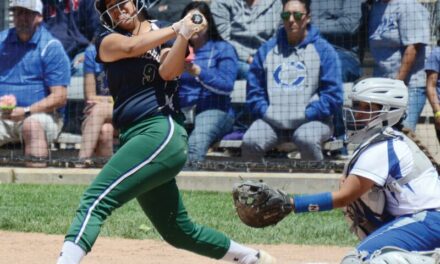