Robert Garza was named the District 1-6A Coach of the Year.

When you lead your football team to a district championship and then a football championship in your rookie year as head coach, you deserve to be a candidate for Coach of the Year honors.

When you quarterback your team to those same laurels as your new head coach, Robert Garza, you deserve to be considered as Player of the Year.

And it came to pass for Cleveland High head coach Robert Garza, senior quarterback Evan Wysong and junior Stratton Shufelt when the 1-6A All-District names were released last month.

Offensive guard Gabriel Marquez was a second-team selection on offense; linemen Charles Birch and Javis Garcia, plus cornerback Andres Aguirre were on the second team defense.

Ten members of the Rio Rancho Rams were named to the first or second teams, with Rayce Ramirez, Michael Cordero-Gill and Nick Baca tabbed as honorable mention selections.

The big-school game kicks off at 3 p.m.

Locals named to the Green team are Wysong and Garcia of CHS, plus Maria and Smith of RRHS.

On the other side of the ball, on the Red team, will be Rams Montoya and Rubio, plus Storm Negreiros, Shendo and Trujillo. 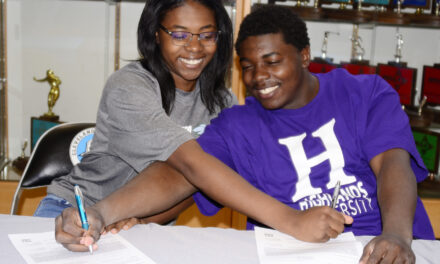