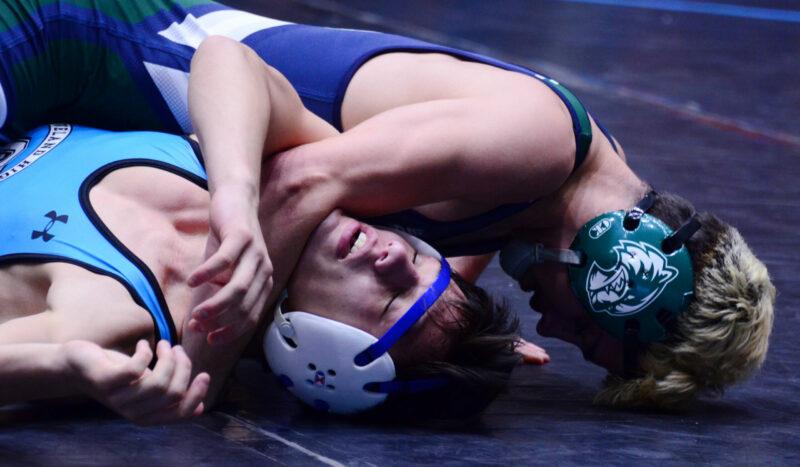 Although this annual head-to-head meeting means nothing when the state tournament takes place at Santa Ana Star Center next month, you can bet the city’s teams will again finish among the top three in Class 5A: In the last five years, the city’s teams have finished 1-2 four times.

With two matches — 106 and 113 pounds — to go, the Storm were up, 36-24: Two falls by the Rams would knot the match at 36. But with Storm senior Tristan Mascarenas awaiting his final home match in the evening’s finale, nobody thought the Rams had a chance to win for a second year in a row.

Mascarenas needed only 95 seconds to record the sixth fall for the Storm, as he pinned Anthony Gutowski. Rams wrestlers notched three pins.

The action opened with a match at 120 pounds, which alerted CHS coach Evan Copeland that Mascarenas — whose family legacy already includes nine state championships among the three siblings — would put the wraps on the city showdown.

“I was happy when we drew 120 to start because Tristan’s wrestling his last match at Cleveland; it’s special,” Copeland said.

Here are the individual results, in order, by weight and match score at the end of each:

• 138-Alex Emmer of Rio Rancho pinned Xzavier Romero-Trujillo in 5:26. The Rams were penalized a match point at the end of the match. (Storm 9, Rams 8)

• 145-Josh Coon of Cleveland seemed on his way to a loss, trailing 6-3 as his match went into the third round, but his last-minute efforts resulted in an 8-6 decision over Ventura Velasquez (Storm 12, Rams 8)

• 170-Xavier Salazar of Rio Rancho pinned Matthew Frazier in 4:23. Salazar came within a split-second of pinning Frazier, who was saved by the first-round buzzer. (Storm 18, Rams 18)

• 182-Kymani Castillo of Cleveland got the ball rolling and pushing his team to the win after starting what became a three-pin streak, fastening Noah Lorimer in 1:23. (Storm 24, Rams 18)

• 106-Estevan Encinias of Cleveland erased any hopes Rams fans had of a come-from-behind win, as he posted a 13-2 major-decision over eighth-grader Marcus Williams. (Storm 40, Rams 24)

“We just went out there and wrestled hard, tried to score points,” he said. “Rio Rancho’s tough – they’re going to be there in the end. Anybody can beat anybody on any given day; we just try to prepare as best as we could, go out there and wrestle tough, stay focused and we came out on top tonight.”

Copeland said Wednesday’s lineup may be what takes the mats at the Star Center for state.

RRHS coach Mike Santos said — while smiling — that at state, “We will be 1 and Cleveland will be 2.

“We also switched up the lineup and we had some kids in some other places — we wanted to see some matchups and we thought we’d match up better with the weights,” he said, happiest with his two heaviest wrestlers.

Gregory was coming off an injury and in his first match of the season, he said, while another heavyweight, Ryan Ortiz, was out with an ankle injury. Of course he was also happy with Riley Butt.

“Those two kids (Encinias and Mascarenas) are probably going to be in the (state) finals and probably state champions,” Santos said of the lightweight Storm matmen.

Takedowns: The Storm and Rams are in Lafayette, Colo., this weekend for the annual Top of the Rockies tournament at Centaurus High School.

… The Rams’ next 1-5A match is Jan. 28 at 7 at Cibola. The Storm’s next district match is Wednesday at 7 at Atrisco Heritage Academy. 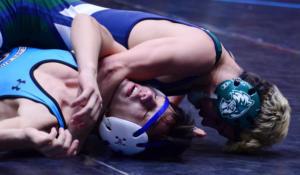 … The host Storm won last weekend’s third annual Conflict at Cleveland, which featured a field of 27 teams and 32-man brackets for each weight division. “We’re just trying to put on a good event, try to get as many good teams that want to come here and wrestle here in New Mexico at Cleveland High School. We’ve got a great facility and so we want to promote Cleveland High School and Cleveland wrestling and New Mexico wrestling,” Copeland said.