ALBUQUERQUE — It took an inning longer than it should have, but shortly after 6 p.m. on Tuesday, Cleveland High School baseball coach Shane Shallenberger had his 300th career victory under his belt.
And just like the city’s other varsity baseball coach, Ron Murphy, had done one week earlier on the road after achieving his state-record 582nd career victory, “Coach Shall” downplayed the significance. Nothing special was planned, other than a plaque noting his 300th W — and this season has been odd not because of the pandemic but because Shallenberger also claimed his 200th win of his career (with Cleveland) on May 1.
“I think the specialty of it, honestly, just thinking about all the players and coaches I’ve had over all the years, and that’s real special, because it brings back memories,” Shallenberger said. “My goals were always to help kids get better and achieve the dream of possibly playing in college — because that was my dream and I got to fulfill that … not only to play in college, but to get an education.”
Storm 19, Cibola 4: A five-run second inning gave the visiting Storm enough runs to beat the fourth-place Cougars on a hot afternoon “down the hill.”
Jace Dominic socked a solo home run and, after Alex Admire and Dayne Pengelly went down on strikes, Cibola starter Ashton Luera walked the bases loaded.
Bad move: Christian Hoffman clouted a grand slam for a 5-0 lead.
Cleveland wasn’t done scoring, scoring twice in the third, three runs in each of the fourth and fifth innings — when they amassed a 10-run lead and were poised to end it early — and then six more in the sixth.
Admire singled, Pengelly tripled him home, and then DJ Sandoval singled to send Pengelly across the plate to make it 7-0 in the third.
A couple of Cougar errors, a hit batter and a walk helped the Storm score three unearned runs in the fourth, when Admire had an RBI single.
Dominic and Pengelly added RBI-singles in the three-run fifth, when the Storm had a 13-0 lead and needed just three outs from reliever Logan Kinter to shorten the hot afternoon.
But Kinter surrendered two walks and three hits, with Cibola scoring four times to whittle the Storm’s lead to nine, 13-4, and prolong the game.
Eleven batters later, Cleveland had made it 19-4, with RBI singles from Hoffman, Korbin Bauer, Dominic, Sandoval and Julian Gonzales, plus an RBI double by Chase Tyler.
Martinez replaced Kinter on the hill, setting the Cougars down 1-2-3 in their half of the sixth.
Martinez was the fourth pitcher for Cleveland, which began with Austin Barela (6-0), followed by Hoffman and hard-luck Kinter.
By game’s end, every Storm starter had at least one hit, with Sandoval, Dominic and Pengelly having three hits each.

Cleveland High baseball coach Shane Shallenberger chats with his players following the Storm’s victory at Cibola Tuesday afternoon. He didn’t have any celebratory plans, just planning to look ahead to his team’s next game.

Extra innings: The Storm had a key showdown with visiting Volcano Vista Friday evening. “I think we need to beat Volcano,” Shallenberger said after the win at Cibola, when asked if his team had to win out for a wild-card berth at state. “I don’t know that it matters what we do against Rio, and we have to beat Atrisco. … Our strength of schedule’s been tough; we’ve beat a lot of district champs.”
… The regular season ends this week, when the Storm entertain district-leading Rio Rancho Tuesday at 6 p.m., and then visit last-place Atrisco Heritage Academy Friday at 4 p.m. 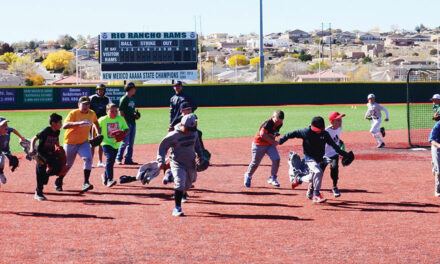 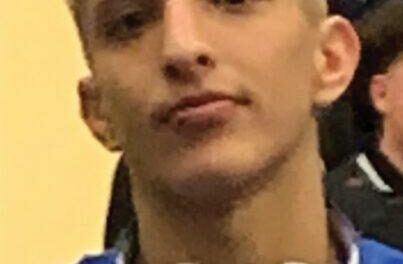