A trio of Cleveland pitchers combined for a dozen strikeouts Thursday afternoon, as the Storm advanced into a semifinal game of the Sal Puentes/Rio Rancho Tourney with a 7-2 win over Artesia.

The Storm will face Carlsbad (12-2), a 1-0 victor over Albuquerque Academy, in a 4 p.m. semifinal game Friday at RRHS.

Storm starting pitcher Austin Barela allowed a solo homer to Artesia (6-4) starter Josh Madrid in the second, then gave up a leadoff double and RBI-single by Madrid in the fourth, when the Bulldogs upped their lead to 2-0.

Cleveland (8-6), which beat Artesia 14-4 in the Hobbs round-robin on March 5, sent 10 batters to the plate in the fifth, helped along by infield errors and three walks, to score six times.

Gavin Hoffman, who followed Barela to the mound in the sixth, started the devastation with a one-out triple and scored when DJ Sandoval’s grounder to third was misplayed. Designated-hitter Braylen Elzy walked to force in a run and Barela added an RBI-double, as four of the runs were unearned.

As can happen sometimes in baseball, Malachi flew out to center for that inning’s first out and did it again to end the frame.

The Storm tacked on another unearned run in the sixth, when Chase Tyler reached on an error, stole second and third, and came in on a sacrifice fly by Brandon Hennessy.

Barela pitched the first five innings and allowed five hits, striking out nine and walking only one.

Hoffman pitched the sixth and, although he walked to batters after one out, struck out the next two batters to escape without allowing a runner as far as third.

Logan Kinter pitched the seventh, giving up a single and a walk but stuck out one and got two harmless groundball outs.

“I thought (our pitchers) were in the zone a lot more,” CHS coach Shane Shallenberger said. “I think we did a good job on the mound, for the most part.”

Offensively, he said, “We struggled for a little bit; give credit to their guy – he did a good job, throwing strikes and just over-doing a few things.”

Braylen Elzy slides home safely in the fifth to make it a 5-2 Storm lead. (Herron photo) 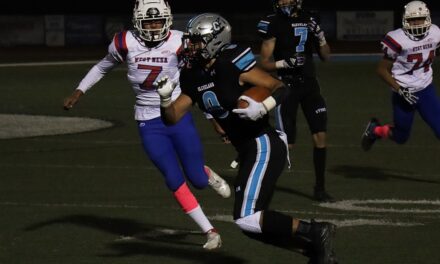