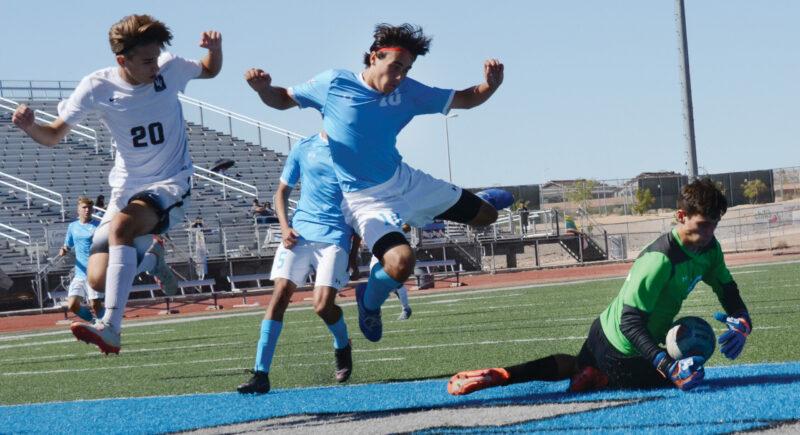 The Class 5A defending champion Cleveland Storm boys soccer team snapped out of its doldrums recently, snapping its two-game District 1-5A losing streak with a 4-0 shutout of visiting Cibola, followed by a 5-3 win three days later over visiting Volcano Vista.

Incidentally, those two district losses are one more than the Storm lost in the past two seasons combined.

Struggling Cibola wasn’t about to pose a problem for the Storm, although the Hawks could — but the Storm scored the game’s first four goals, all in the first half, and, despite an injury to starting goalkeeper Andreas Chacon, were able to hold on. Gabe Legendre led the offense with two goals and his brother Nick also tallied one goal; Luke Beachler added a goal and an assist, and Louis Perry also scored. 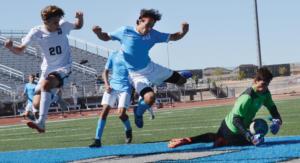 Cleveland High’s Andreas Chacon comes up with a big save as two teammates are about to leap over him in the Storm’s victory over Volcano Vista last Saturday.

After a non-district 3-2, double-OT win at Eldorado on Wednesday, where Gabe Legendre reportedly suffered a broken nose  — a make-up of a game originally slated for Sept. 21 but postponed because of a lack of officials — the Storm played a key game at city foe Rio Rancho on Saturday morning.

The Rams, ranked seventh in the latest MaxPreps state ranking (the Storm were No. 6), beat the host Storm 3-2 in their first meeting.

A few hours following the Storm’s victory over VVHS, the Rams beat Cibola 3-1 on the Cougars’ new turf field down the hill.

That set up a key 1-5A showdown Wednesday evening at Rio Rancho between the Rams and No. 3 Atrisco Heritage Academy.

AHA jumped on the Rams for a 1-0 lead in the game’s eighth minute and made it 2-0 off a free kick about four minutes later; the score remained 2-0 when halftime arrived.

In the 49th minute, off a free kick by Lamar Bynum, Devon Duran headed a carom into the Jaguars’ goal to cut the lead in half, 2-1.

The Rams, en route to seeing their 1-5A mark dip to 2-2, allowed a third AHA goal in the 73rd minute and couldn’t recover, although Rio Rancho ultimately had two goals in the second half disallowed.

This week, the Storm entertain AHA Wednesday at 6, hoping to avenge a 2-0 loss to the Jaguars on Sept. 28, and then play a non-district game at Albuquerque Academy at 4 on Friday.

Last Saturday morning, a late goal by Rio Rancho’s sophomore forward Ainsley Martin tied the 15th-ranked Rams with top-ranked Cibola, 1-1, sending the game into one scoreless, 10-minute overtime period and then a second OT session, which ended with the Cougars escaping with a 2-1 victory after a tally in the final minutes.

The Rams then evened their 1-5A record at 2-2 after a 3-0 win over AHA at the APS soccer complex on Wednesday, with the Rams getting two goals from Sierra Martin and another by Maya Romero.

Like the boys, the Rams girls then met Cleveland at Lightning Bolt Stadium Saturday morning. The Rams had defeated the Storm 2-1 in their first meeting of the season, Sept. 25, at RRHS.

Cleveland, which also lost a 2-1 game to Cibola (on Oct. 2), lost a 3-2 contest at Volcano Vista last Saturday after the Hawks netted the game-winner with about 10 minutes left in regulation. Arianna Barreras had knotted the game at 2 when she scored in the 68th minute; Josie Crump also scored for the Storm.

The Storm dropped a 2-0 game to La Cueva on Wednesday afternoon at the APS soccer complex; it was a make-up of a game postponed by lightning in September.

This week, the Rams have but one game: Volcano Vista visits Wednesday at 6 p.m.

The Storm face AHA Wednesday at 4 at the APS soccer complex, then get another crack at Cibola Saturday at 10:15 a.m. on the Storm’s pitch.

Headers: After this week’s games, only one week remains in the regular season; the first round of the state playoffs will take place Nov. 1-2.

… Although the city’s boys teams appear to be in good shape for postseason seeds, the girls teams will need more wins than losses in the games that remain for each.

… Last season, the RRHS girls, with only three wins in district, failed to make the postseason for the first time since 2003, after nudging their way into the playoffs in 2017 as the No. 12 seed. 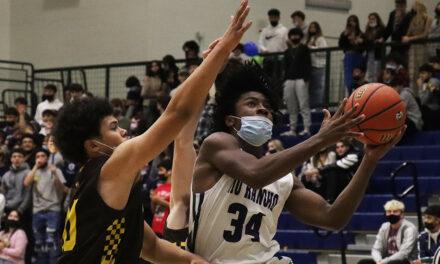 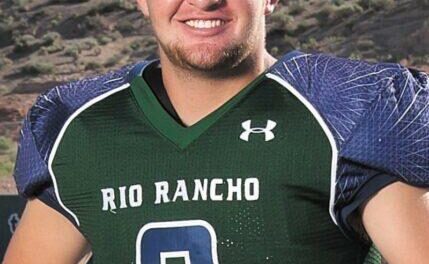