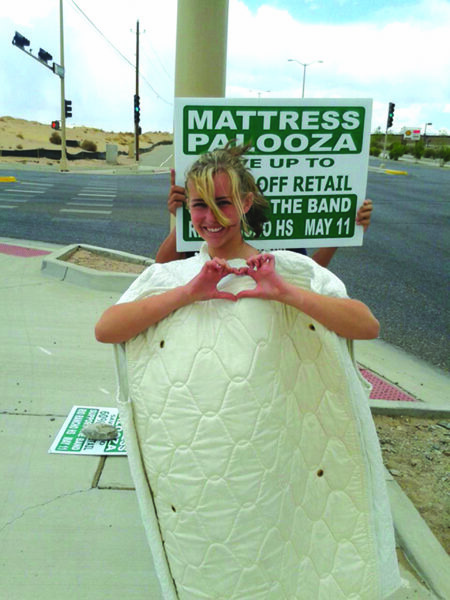 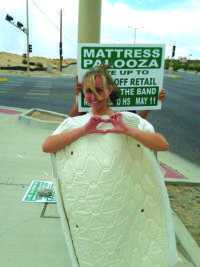 Amy Byres dresses as a mattress for the Rio Rancho High School band Mattress Palooza Fundraiser in May 2013.

Rio Rancho High School will raise money for its band by selling mattresses on Sunday, March 15, from 10 a.m. to 5 p.m. in the band room at 301 Loma Colorado Drive.

This may not seem as strange of a fundraiser now, but back in May 2013, it was.

This was the first year RRHS’s band had a Mattress Palooza Fundraiser. Band parents and students alike were skeptical of directors Kurt Schmidt (now the fine arts director at Rio Rancho Public Schools) and Matthew Casarez. Turns out they knew what they were doing.

This was also my sophomore year in the band. I volunteered to work the mattress fundraiser.

I did not mind spending a Saturday helping the band because I was going to be with my friends all day. We all had a lot of fun coming up with ways to sell mattresses.

I believe my way was the best. I wore a mattress costume and made a sign that said, “I will stop singing if you buy a mattress.”

I stood out on the corner of Broadmoor and High Resort boulevards in my costume and sang “Twinkle Twinkle Little Star” at the top of my lungs.

I have a voice that sounds like nails on a chalkboard. So I think people were eager to make me stop singing — at least my classmates were.

By the end of the day, the band did great. But I am telling you this story because it helped fund a very special memory of mine.

Money from the fundraiser contributed to a trip to Disneyland the band was taking later that month. We were able to play the Disney theme song —”When You Wish Upon a Star”— in their recording studio while there.

We arrived at Disney’s studios and filed into a large room. A Disney director came out and conducted our band.

We played the melody a few times, and then the Disney director played it back to us. To this day, I can hear the music my band made.

This trip showed students where music can take someone. This inspired some to pursue a career in music. A few of the band students are in music today.

The band program at RRHS gave me a once-in-a-lifetime opportunity and I will never forget that.

So buy a mattress and help fund lifelong memories.

Letter to the editor: Sheriff not doing the full job