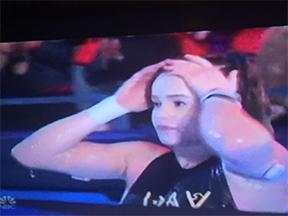 Katie Bone, as seen on television during the ANW semifinals, aired Aug. 8.

Katie lost her grip on one of the obstacles and hit the water in the first stage of what will be four stages, leading to the Season 14 winner.

Be sure to read all about the home-schooled athlete’s summer in the Observer!