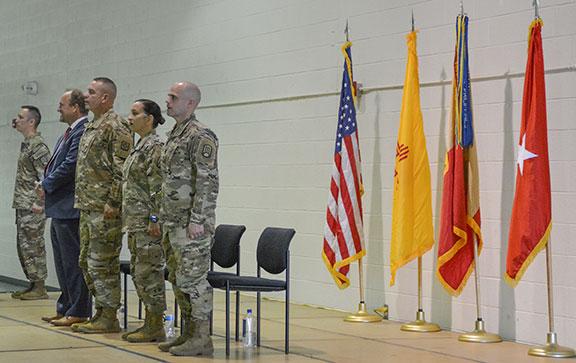 The unit and its guests celebrated the centennial with a memorial walk/run, an open house with food and history display, and a brief ceremony and reception Saturday at the Rio Rancho Readiness Center.

During the ceremony, Brig. Gen. Jamison Herrera, a former 111th Sustainment Brigade commander, said the unit members had been asked to do a multitude of missions when the nation needed them most.

Brigade commander Col. Pia Romero said the unit’s anniversary was May 2, the date it was organized as the 111th Cavalry after being a militia group. In 1940, it was redesignated as the 200th Coast Artillery and was among the more than 75,000 U.S. military members surrendered to the Japanese in the Philippines on April 9, 1942.

“This order came over the objection of the soldiers themselves, who preferred to fight to the end rather than surrender,” Romero said.

She said the soldiers gallantly defended their position despite being outnumbered, ill-equipped and under-supplied. After the surrender, they were forced to endure the Bataan Death March and taken by ship in terrible conditions to Japanese prisoner of war camps, where they continued to suffer mistreatment. Of the 1,800 New Mexicans deployed to the Philippines, 829 survived, according to a brigade news release.

Romero said the free world owes those soldiers a debt for their sacrifice.

The unit was organized as the 111th Air Defense Artillery Brigade in 1972 and became the 111th Maneuver Enhancement Brigade in 2005, according to the release. In 2016, it changed to the 111th Sustainment Brigade.

He said he was proud and honored to have the brigade and its members as part of the community. Hull thanked the soldiers for stepping forward to defend the U.S. Constitution and the rights and freedoms of their countrymen.

The brigade’s missions have included air defense of Washington, D.C., after the 9-11 terrorist attacks, disaster relief after multiple hurricanes and transporting thousands of gallons of water and thousands of pounds of food around the state during the height of COVID-19 pandemic.

Herrera said the unit can look ahead to the next 100 years.

“Only our imagination is going to limit us at this point,” he continued.

Some National Guard units are responding to wildfires in the state, and some members of the 111th Sustainment Brigade are deployed.

“Every day when it’s tough, remember we signed up to serve,” Herrera said.

He told the soldiers he appreciated everything they had already done. 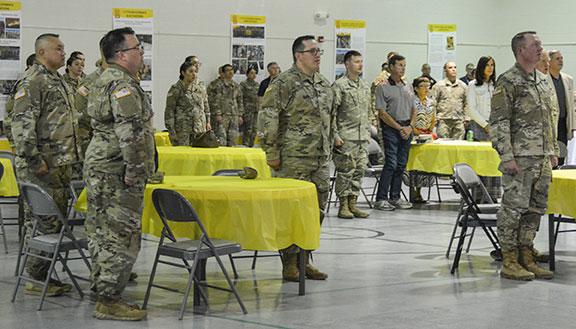 Members of the New Mexico Army National Guard 111th Sustainment Brigade and guests sing the Army song Saturday at the end of the ceremony honoring the 100th anniversary of the unit’s organization. The brigade is based in Rio Rancho. (Argen Marie Duncan / Observer)

ABQ-area homebuilders: Demand is strong, but so are market threats