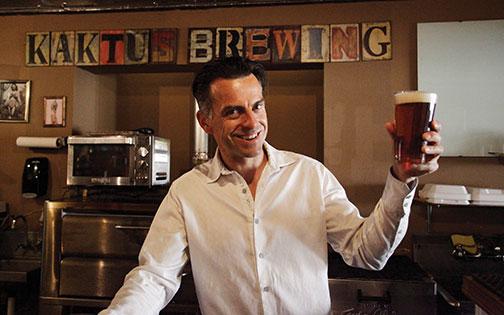 BERNALILLO — It’s standing room only on a sunny Friday afternoon in April as Kaktus Brewing Co. Inc. owner Dana Koller prepares to open his business for a second time.
Koller had to close his brewery in November because of social-distancing mandates by the state during the pandemic.
Since then, instead of offering packaged beer for take-out, Koller said he decided to use that time to remodel the brewery in preparation for a new beginning.
“I can still remember opening for the first time in 2013,” he said.
In fact, Koller said, he and his business partner, Mark Matheson, transformed a two-car garage into what is now Kaktus Brewing.
“It took about two years to build it out, and after that, the rest is kind of history,” he said.
Now, Koller said the brewery has a fresher look with new tables and a covered patio that extends outward over the stage that was once open. Other additions include a back patio with new outdoor furnishings and a bar, and pavement settings in place of the gravel that used to be in the front patio.
“We would like to pay ourselves more, but every year we always talk ourselves into reinvesting into the company, and that is what’s made these upgrades possible,” he said.
Besides the upgrades, Koller said he is still pushing for sustainability practices in health and wellness at the brewery.
“This comes from an environment where we want the best ingredients for our beer and we also want the best ingredients for our food,” he said. “Our rule of thumb is we won’t serve anything we wouldn’t eat or drink ourselves.”
This means all of Kaktus Brewing’s food is sustainably farmed, antibiotic free, with no fillers or artificial flavors, he said.
“This also promotes what I call a circular economy,” Koller said. “This means we get some use out of all of our products.”
For example, the spent grains used to brew the beer at Kaktus are sent to local farmers so they can feed their livestock.
“We are stepping that up this year pretty aggressively, now that I get to come back to the business full-time,” he said. “This means we can bring our chickens back on to the property and people can feed them, which is really fun.”
Koller said he is also working on getting more landscaping done and building a rain-harvesting system to irrigate the property.
“We want to get certified in the near future to use our own crops and eggs as part of our farm-to-table efforts,” he said.
Without the town of Bernalillo and people like Mike Kloeppel, the town’s director of Economic and Community Development, Koller said the brewery would have had a very difficult time staying afloat.
“It was already challenging trying to get through the pandemic, but without the support we received from different grants and loans, it would be hard to say where this business would’ve ended up,” he said.
Koller said he took advantage of four loans from three programs to keep the brewery running.
“We took on another $40,000 in debt to stay alive and make improvements,” he said, “which is always good if you can pay it back.”
Koller said he’s heard several of his competitors announce they were going out of business, which was the catalyst for him to keep going.
He also got licensing for wholesale and package distribution in case he wasn’t able to reopen to the public.
“We weren’t that excited about changing our business model, but this was something we were prepared to do in case things continued,” he said. “But we were able to weather the storm, and now we are excited to be reopen for business.”
Bernalillo Mayor Jack Torres said he is happy to see many businesses in his area still moving forward.
“I think right now, everybody’s in that ‘what’s next’ sort of atmosphere,” he said. “We’re starting to sort of see some daylight, though, and I find that promising.”
Torres said having a vaccine site at the Bernalillo Recreation Center has helped many of the town’s residents feel confident, which has shown at the local business level.
“I am glad to see Dana is still up and running since a few of our local businesses haven’t made it through, unfortunately,” he said.
Koller said his main customer base has been very supportive and has come back pretty fast upon the brewery re-opening.
“To be honest, I feel we are doing fairly well,” he said. “The numbers are showing us signs of early success, and if things keep going the way they are, I believe we don’t have anything to worry about.”

Mass shootings: We’re all at fault for failing to stop them