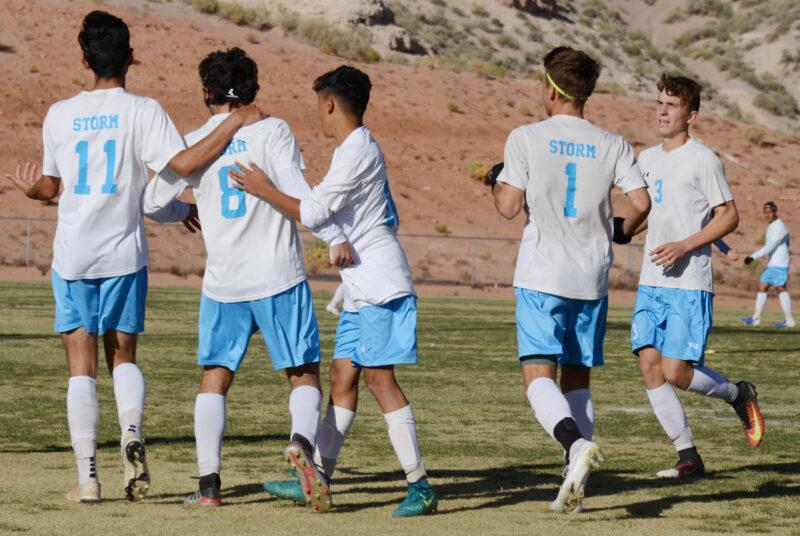 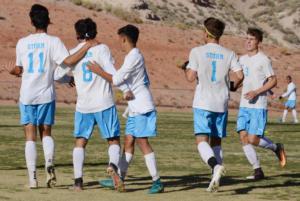 The Storm congratulate senior Gabe Legendre (8) after the first goal of their 8-1 rout of the Rams on Oct. 21.

Defending Class 5A boys champion Cleveland High got the 4 seed Sunday and with it a first-round bye, while the Rio Rancho Rams were seeded seventh and have a first-round home game Saturday at 3 vs. No. 10 Eldorado.

The Storm (15-5) will be idle until the state quarterfinal round on Wednesday, Nov. 6, when they’ll meet the winner of the No. 5 Gadsden-No. 12 Oñate first-round game. The Knights won the first meeting, 2-1, after a shootout, but the Panthers beat OHS in both of their District 3-5A meetings, 3-0 and 1-0.

The Rams and Eagles last met in the postseason in 2012, a 1-0 EHS win in a quarterfinal contest.

The Cleveland girls (9-8-1), who finished in third place in 1-5A, received the 9 seed, which is what coach Greg Rusk had predicted. The Storm head down I-25 Saturday to meet No. 8 Mayfield (15-4-1) at noon for a first-round game. The Trojans edged the Storm 1-0 in double-overtime in their Aug. 24 meeting at Lightning Bolt Stadium.

The Rio Rancho girls team (9-11) missed the postseason bracket for the second year in a row.

All quarterfinal games, semifinal games (Nov. 7) and championship games (Nov. 8) will be played at the Bernalillo soccer complex.

Tickets cost $5 for students, senior citizens and military member; $10 for adults; and $15 for an adult day pass. (nmact.org) 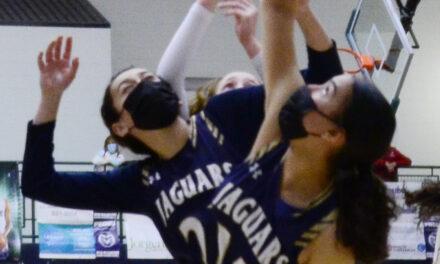