Biden in NM: ‘We have a responsibility to help this state recover’

We’ll do whatever it takes, as long as it takes — President Joe Biden
SANTA FE — In his first visit to New Mexico since becoming president, Joe Biden cleared the way for additional federal funding to help with wildfires in the state, and he made clear that the government has a moral obligation to help northern New Mexicans who have been impacted by the Calf Canyon/Hermits Peak Fire.

“We have a responsibility to help this state recover, to help the families who have been here for centuries…,” Biden said after arriving in Santa Fe. Air Force One flew over the Calf Canyon/Hermits Peak fire before touching down, and the president called the amount of territory affected “astounding.”

“We’ll do whatever it takes, as long as it takes,” he later added.

President Biden entered New Mexico’s emergency operations center at about 4:30 p.m. and thanked the staff. Their work saves lives, he said, and it isn’t easy to do.

The president added that it was important for states to support each other in times of disaster. He said he and members of Congress understand the federal government must be more agile as it helps states recover.

“We are a federal system — that’s why I have no reluctance to do everything we possibly can to meet all of New Mexico’s needs and stay as long as it takes to meet those needs,” Biden said.

He said his administration is allowing 100% reimbursement of costs where it has authority to do so.

With a giant fire map projected on the wall behind him, Biden spoke softly but grew animated when discussing what it’s been like in his career to address the families of firefighters who have died on duty.

President Biden said the federal government would pick up 100% of the cost of “protective measures” and similar costs required to address the fire.

The president said FEMA will make phone calls to anyone who has been denied assistance and walk them through their next steps.

He also thanked firefighters and Nation Guard troops on site for their work.

Air Force One touched down at Kirtland Air Force Base at about 1:45 p.m.

The president’s motorcade departed the runway at 2:05 p.m. Lujan Grisham joined the president for the drive to Santa Fe, where he will be briefed on what is shaping up to be one of New Mexico’s worst fire seasons. Hundreds of homes have already been destroyed and thousands of New Mexicans have had to flee their homes.

Albuquerque police are warning drivers to expect delays on Interstate 25, noting that it will be shut down twice today as the president travels through Albuquerque to and from Santa Fe. They did not give specific times for the closures.

The presidential visit comes as the federal government faces criticism for starting what is now the largest fire in state history. Biden is planning to meet with first responders and families affected by wildfires, according to the White House.

The Governor’s Office estimates that the Calf Canyon/Hermits Peak Fire has damaged or destroyed about 1,200 homes. Firefighting costs to date exceed $206 million.

U.S. Forest Service crews ignited a prescribed burn on April 6 west of Las Vegas. But erratic winds fanned flames outside the project boundary. By the afternoon, the agency declared the incident the Hermits Peak wildfire.

The Calf Canyon Fire started as a Forest Service pile burn from late January that reignited months later and even after several snowstorms.

Both fires merged in late April and have now grown to more than 320,000 acres.

The Forest Service has paused prescribed burns on forest lands.

“We need to make sure this doesn’t happen again,” Biden said.

In early May, Biden approved a major disaster declaration so that people affected by several New Mexico wildfires could begin getting federal assistance.

This year’s fire season has been early and destructive. More than 608,000 acres have burned across New Mexico this year, according to the National Interagency Fire Center. 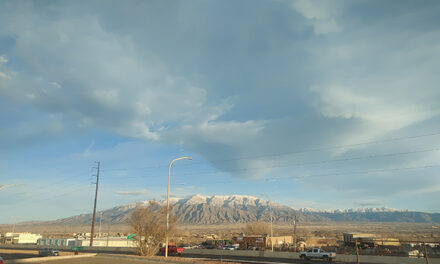 Another calm day, take a walk