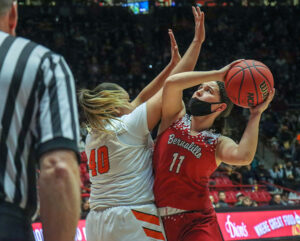 Bernalillo’s Juliana Aragon attacks the basket against Gallup’s Hailey Long during the 4A girls basketball state semifinals on Thursday, March 10, 2022, at the Pit in Albuquerque. Matt Hollinshead/Observer

“The job’s not finished, and we have one more,” Bernalillo point guard Juliana Aragon.

ALBUQUERQUE — The Bernalillo Spartans are at the doorstep of a blue trophy in girls basketball for the first time in 39 years. Only this time, they hope to finally bring home.

After grinding out a 63-59 win over Gallup in Thursday’s 4A state semifinals, Bernalillo will face Kirtland Central in Friday’s state finals.

“”I’m so grateful, all of us are. Just one more (game),” Bernalillo point guard Juliana Aragon said. “No one really knew about this program for a long time, and we wanted to come make a difference, change the culture.”

It’s the first state finals appearance since 1983 for Bernalillo, which lost 56-54 to Kirtland, a New Mexico basketball powerhouse, that year.

Kirtland, which is back in its third state finals in four years, eyes its 20th blue trophy in team history and its first since 2012.

Despite facing plenty of double-team looks (whether double-team traps or one-on-one with backside help), Julianna Aragon did plenty of damage on the scoring end.

In the first half, she created plenty of open-floor space and often took it to the rim. In the third quarter, she hit a couple pull-up jumpers as well as one off a runner breaking through a double-team blockade. 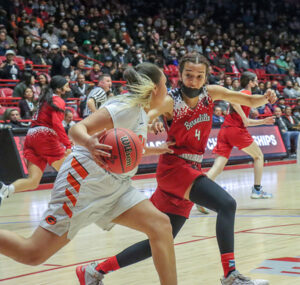 Bernalillo’s Savannah Harris looks to get a defensive stop against Gallup’s Hailey Long during the 4A girls basketball state semifinals on Thursday, March 10, 2022, at the Pit in Albuquerque. Matt Hollinshead/Observer

All night, however, Aragon was also able to find teammates on quick kick-outs. That paid off during the final minutes.

“They make my job so much easier,” she said. “I trust them. When we needed those big shots, they knocked them out.”

BHS guard Nizhoni Keeto hit a kick-out 3-pointer from the right corner, and Bernalillo guard Leah Valdez buried a left-corner 3 of her own. Valdez also had a critical far-side baseline steal that resulted in a trip to the foul line, plus the game-winning defensive rebound.

“It feels great, knowing that I can do something to help the team,” Valdez said.

“The job’s not finished, and we have one more,” Aragon said. 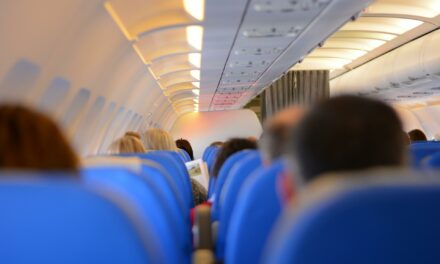