The Cleveland and Rio Rancho high school baseball teams added victories to their District 1-5A marks last week, as the City of Vision’s state diamond powerhouses roll toward the state tournament — but not before what might be the district championship game between the two at RRHS on April 26.
Rio Rancho 9, Volcano Vista 8: Kai Fitak was happily carried off the mound Tuesday afternoon, after first baseman Seth Lee squeezed a pop up hit his way for the game’s final out.
The Rams had just beaten the Hawks and RRHS coach Ron Murphy instructed his players to carry their Fitak (2-0) off the field. It turns out, he’d injured an ankle chasing a pop-up.
“He carried you for the last three innings; you carry him,” Murphy had told his Rams.
Cousins Jaymin Fitak and Kai Fitak probably didn’t expect this outcome, but Kai held the winning hand.
Senior Jaymin Fitak (5-1) started the game for the Hawks (12-7, 2-2 in 1-5A) on a horrendously windy day, and was charged with all the Rams’ runs, although the final two were unearned.
Junior Kai Fitak relieved Rams starter Devon Alvarado in the fourth, after Tony Leger’s grand slam put the Hawks ahead, 8-7. Teammate Aidan Zacarias provided the Hawks their first two runs on a two-run homer off Alvarado in the second inning.
But five errors doomed the Hawks, losing their second game in Rio Rancho this season; they also lost the APS Metro Championship game, 6-0, on March 19.
Jaymin Fitak walked Izaiah Tafoya to start the fifth and shortstop Jordan Baca’s wild throw to first gave the Rams two base runners. Casen Savage doubled them home and the scoring was complete.
Kai Fitak, the Rams’ starting third baseman, had an RBI triple against his cousin in the first inning and an RBI double in the second, as the Rams built a 7-2 lead after two innings.
“It feels good; me and him have always been competitive,” Kai Fitak said. “It just feels good to come out on top today.”
Storm 15, Atrisco Heritage Academy 0: Logan Kinter scattered three hits and the visiting Storm closed out the first half of the district season with a win Tuesday in the South Valley.
Roman Branaugh led the CHS offense, going 3 for 4 with 3 RBIs. Austin Barela homered and drove in two runs, and DJ Sandoval tripled twice in five at-bats and drove in two runs.
The Storm scored five runs in the first, one in the second, four in the third, two in the fourth and three in the fifth, the final inning.
La Cueva 6, Storm 4: Right after the host Storm (13-8) staked starting pitcher Jace Dominic to a 3-1 lead in the fifth inning Wednesday afternoon, reliever Gavin Hoffman was rocked for four of the Bears’ five runs in the sixth, when La Cueva (16-1) took the lead to keep.
The Storm pushed across a run in the seventh, but came up short, as they saw their seven-game winning streak come to an end.
Braylen Elzy and Kinter, with a triple,each had two of the Storm’s six hits, and each stole a base.
Rams 10, AHA 0 (6 inns.): Jason Parker threw five no-hit innings and Elijah Castañeda closed out the sixth inning without yielding a hit in this mercy-rule-shortened game Thursday afternoon.
Vascon Smith walloped two home runs that some said would be homers at Yellowstone Park, and Josh Boyer finished a triple short of the cycle as the Rams (20-3, 4-1) remained a half-game behind Cleveland in the district standings.
AHA (3-18, 0-5) remained in the district cellar.
Extra innings: The Rams play just once this week, heading down the hill to meet Cibola on Friday at 4 p.m. Rio Rancho whipped the Cougars 11-3 in their meeting at RRHS on April 5.
… The Storm play twice this week: Cibola visits the Shockyards Tuesday at 6 p.m., and the Storm play at Volcano Vista Friday at 4. Cleveland won the first meetings with those teams, 16-0 at Cibola and 1-0 vs. the Hawks at Cleveland. 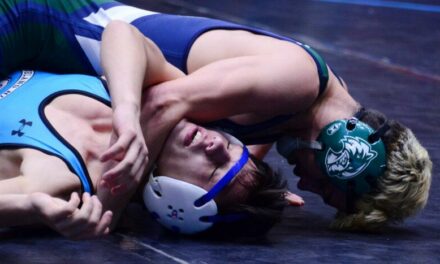 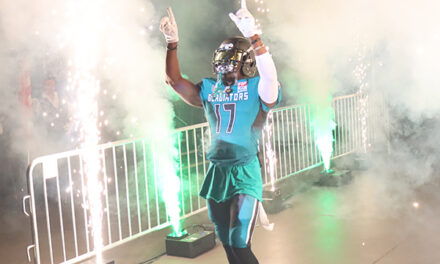