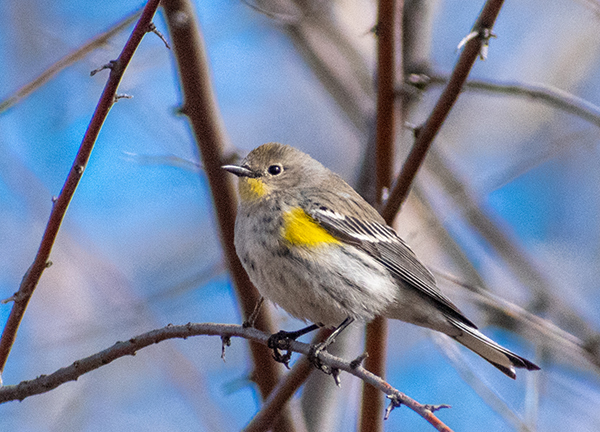 Thursday the 5th is National Bird Day, so I thought I would share one of my favorite birds this week: The Yellow-Rumped Warbler (lots of birders I know call them “Rumpies”).

This little bird measures about five to six inches long, and is very quick to flit between the branches of trees. Interestingly, its name refers to the patch of yellow on its rump that can be seen most clearly when it’s in flight.

They also feature yellow patches along the sides of their chests.

There are two subspecies of Yellow-Rumped Warblers. They have a many traits in common, but a yellow patch on the throat distinguishes the Audubon subspecies of the Rumpy from the Myrtle subspecies that is found in the Eastern US.

Rumpies are pretty hearty birds, given their size. They survive well even in colder climates because of their diverse eating habits. They prefer insects, darting out from a branch to catch flying insects, but they will also eat berries. They can eat a wider variety of berries than other warblers, because they can digest the berries’ waxy coating.

While not as common during the winter, they can still be seen from time to time. In fact, I was inspired to write this week’s column because I saw one in a tree outside my window today!