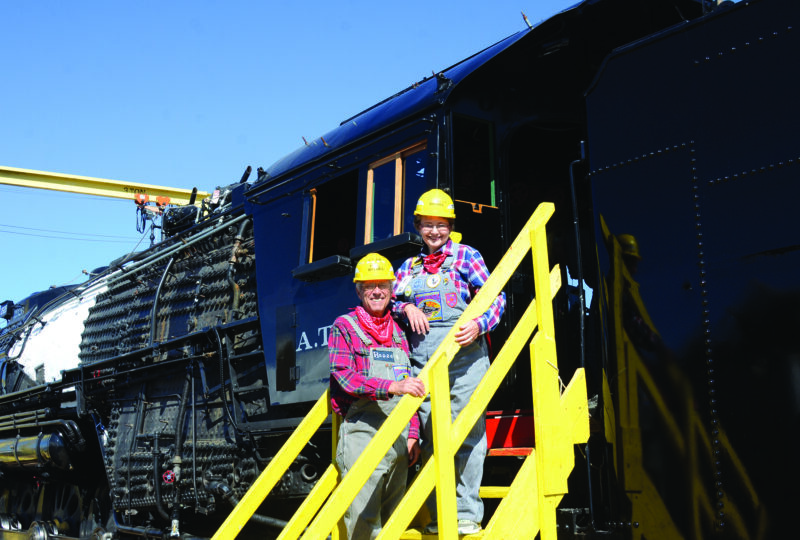 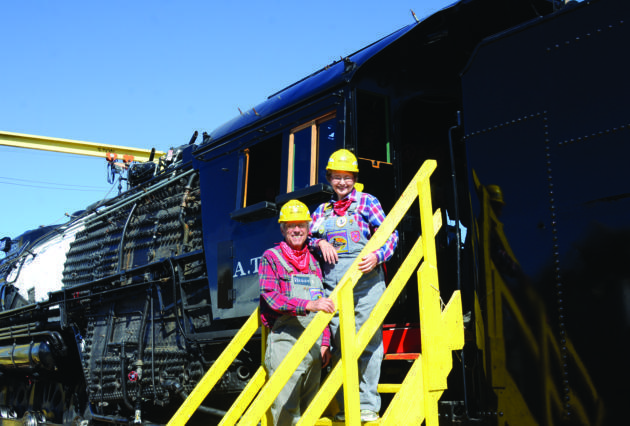 Paul and Marcia Baynes pause before heading into the AT&SF locomotive 2926 cab. The Rio Rancho couple is helping restore the historical train engine, which was on display recently at an open house.
(Gary Herron/ Rio Rancho Observer)

ALBUQUERQUE —Moving first from the Minneapolis suburbs to Española and then to Rio Rancho a few years later easily put Paul and Marcia Baynes a lot closer to their loved ones: a daughter, a grandchild and vintage AT&SF locomotive 2926.

The former they can see anytime, as they live within walking distance of their daughter and granddaughter’s home in Vista Hills. The latter only requires a half-hour drive into Albuquerque twice a week, where they volunteer on the “2926 project.”

In their 70s, they have other things to do, too: Paul sings in a barbershop quartet, and Marcia’s in an a cappella group.

“We don’t sit and watch TV, unless it’s a Hallmark movie,” Marcia joked.

She participated in the New Mexico Tourism Department’s recent “listening session” in Rio Rancho, to see how 2926 could play a role and/or benefit from what will be a 10-year state tourism “road map.”

This mechanical beast logged many of its accrued million miles of service in New Mexico and once hit 103 mph on tracks near Vaughn. Once it gets moving, it’s going to need a way to stop.

That’s where Paul Baynes comes in: He’s basically an air-brakes genius who can work on a 75-year-old locomotive. 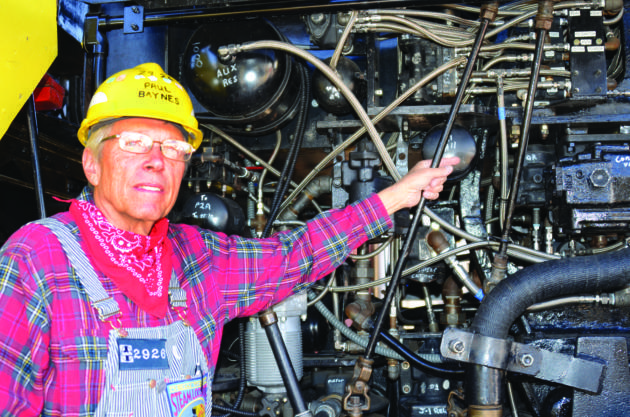 “I was interested because I worked on the railroad,” Paul said. “It’s good to use what I learned, and to learn the history, too. … I’m a dinosaur and the (brake) system’s a dinosaur.””

If what he’s learned isn’t enough, he has a mentor in Florida.

Longtime residents of the metro area may recall 2926: After its 12-year life hauling freight for the AT&SF, it “lived” at Coronado Park, within sight of motorists whizzing by on I-40.

Termed a 4-8-4 because of its wheel configuration and built in 1944 by Baldwin Locomotive Works in Philadelphia, it was one of 30 engines put into service when steam powered America, sending freight and passengers from coast to coast.

When diesel power became the preferred way to go, steam locomotives basically were “put to rest,” some scrapped, others put on display in city parks — as 2926 was after its final run in 1956.

The New Mexico Steam Locomotive and Railroad Historical Society, founded more than 20 years ago by rail enthusiasts, acquired 2926 from the City of Albuquerque. It is listed on the State of New Mexico historic register.

Along the way, more than $2 million in cash, donated goods and services, and more than 121,000 hours of volunteer labor were committed to bring 2926 back to operational condition. After more than 16 years of hard work, complete restoration is nearly two years away and its fans are anticipating seeing — and hearing — it fired up.

After that, excursions for rail and steam-locomotive fans will be available: Talked about are junkets to Deming, Spaceport America in southern New Mexico and Las Vegas, N.M.

Restoring 2926 required retooling, rebuilding and creating new tools. Baldwin’s been out of business since 1972.

There aren’t many parts stores, and only six of the 2900 series are still around, with one (2925) in the California State Railroad Museum in Sacramento and others in parks in Modesto, Calif., and Fort Madison, Iowa.

Volunteer workers got covered with grime when 2926’s tender was restored, removing three tons of oil, dirt and sludge. 2926 weighs over 500,000 pounds, is 121 feet long, has 80-inch drive wheels, generates 4,000 horsepower and once cruised the rails at 90 mph — although a former engineer on the beast told club members he’d once had it up to 108 mph on a run from Clovis to Belen.

Most of the 2900 series runs were between Kansas City and Los Angeles, which included passing through New Mexico. Some old-timers may recall 2926 resting quietly, belching steam and hissing, as passengers disembarked for a stay at an iconic Harvey House along the route.

The restoration site, just west of Eighth Street and south of I-40, is open from 9 a.m. to 2 p.m. Wednesdays and Saturdays, when visitors are welcome — and you’ll probably see Paul and Marcia Baynes. Society members and volunteers are always welcomed. (nmslrhs.org) 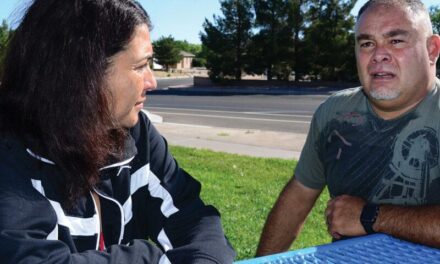 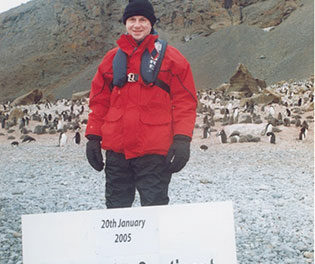