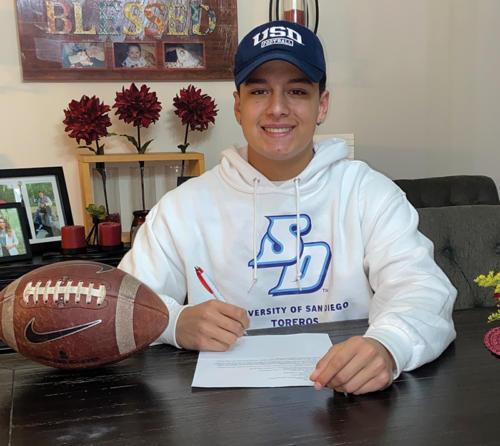 The second Trey/Tre off the Cleveland High football team to sign a national letter of intent to play football in California, Trey Ortega recently inked his commitment to play at the University of San Diego.
Earlier this fall, his football – and basketball – teammate Tre Watson signed to play at Fresno State. Not far from the USD campus is former Rams multi-sport standout Keshawn Banks, who plays on the Aztecs’ football team.
Trey’s older brother Gabe began his college career at the University of New Mexico, before transferring to Abilene Christian. His older sister, Kyla, also went to UNM, where she was a cheerleader; today, she teaches at Cleveland High and coaches the Storm cheerleaders.
Trey Ortega, says CHS football coach Heath Ridenour, is “a Swiss army-knife on the football field.
“He exudes confidence with any role that you give him. He has played (but not limited to) quarterback, running back, slot receiver, free safety, strong safety, corner, punt returner, kick returner and place-kicker. The guy does it all. When you are that talented and apply yourself to so many different skill sets it makes it hard to take him off of the field.
“San Diego is getting a gem. Trey had 21 scholarship offers to play football,” Ridenour said. “He sold himself to as many schools as he possibly could to give himself options. With his academic transcript being as perfect as it can be, he was an easy guy to take a chance on for any college football program. I am so happy for him and his decision to go to San Diego — he will do great there. Trey has a very bright future ahead of him. I am so happy to have one more season with him here at Cleveland. We plan to use his skill set to the fullest!”
Like brother Gabe, Trey grew up playing the game as a youngster, playing quarterback on Young America Football League teams coached by his dad, also Gabe Ortega, and winning two YAFL Super Bowl titles.
Gabe Ortega, who played football at Del Norte High School, was the Albuquerque Tribune’s high school football Player of the Year in 1990, and went on to play football at Brown University and earning letters in 1992 and ’93, so football obviously runs in the family. He wrecked a knee in a 31-10 loss at Princeton in the 1994 season, his final year there, and graduated in 1995.
“My dad’s my idol,” he said. “It was one of the best experiences I could have— (seeing) how smart he is, his football knowledge.
“I look up to Gabe; he laid the path for me and I always wanted to be like him,” Trey said. Their age difference kept them from being teammates on the Storm; during Gabe’s senior season, Trey was a seventh-grader but also present at CHS games.
Why did he select the University of San Diego? “It just felt better. It’s a great program, and with my relationship with the coaches, I felt right at home.” Georgetown and Lehigh were his next choices, if things didn’t work out for him at USD.
Ortega said the Torreros’ coaching staff plans to have him in the defensive secondary, which is fine with him, despite his prowess on offense.
“I like being on the defensive part of the ball, being aggressive,” he explained.
As for his prep highlight, with (hopefully) one more season to go, he said, “My favorite play in my career is probably the touchdown that sealed the game with Clovis last year,” which came in the Storm’s 56-43 victory over the host Wildcats in a 6A semifinal game.
That TD pass came from QB Jeff Davison, and was, according to a newspaper account, “over the top for the dagger, a 70-yard rainbow strike to Trey Ortega for the game-clinching touchdown with 2:19 left.”
“I’m just hoping we can (win another championship) again. We have a heavy senior team coming back,” Ortega said, now with two YAFL titles and a high school title under his belt.
Looking beyond 2021, he said, “Everyone’s dream is to compete at the pro level. After my athletic career is done — I’m very into academics, high grades and stuff like that — the business world (is my destination).”
Ortega said his continued success can be attributed to “my faith in God — that’s one thing that’s special.”
“San Diego has a major connection as a college; I’ll definitely be ready to take it.”
USD, the third-winningest FCS (Football Championship Series) program in the last decade, was aiming to continue — until its season was canceled because of the pandemic — the nation’s longest active conference winning streak this fall (37 games) and reach the FCS Playoffs for the fifth year in a row. The Toreros have won the Pioneer Football League championship in each of the last six years.
• Postponing — or maybe canceling — the football season wasn’t the only “first” endured by the Storm football team.
Traditionally practicing on Thanksgiving Day as part of head coach Heath Ridenour’s “process,” the Storm players weren’t on the field Thursday.
“Yes, Thanksgiving practice will be off the table for the first time since 2014,” Ridenour said. “Hopefully we can create a new tradition and play football in the springtime.”
• Gabe Ortega, 2015 Gatorade Football Player of the Year for New Mexico, played at Abilene Christian two seasons, but left the campus because of the pandemic, coupled with the fact that ACU had to cancel two games this season because of COVID-19. His father said it was a good decision.