The Super Bowl signaled the end of the 2021 football season.

For the University of New Mexico football team, there was no waiting for the end of the NFL season to begin the official prep work of the 2022 season. The Lobos opened spring practice on Feb. 8 with the first of 15 practices over five weeks, culminating in a spring scrimmage at noon on March 12 at University Stadium.

It might be a good opportunity to see a quartet of former Rio Rancho prep players: quarterback Isaiah Chavez and linebacker Josh Howes from Rio Rancho High School, plus linebacker Dion Hunter and wide receiver Luke Wysong from Cleveland High. (Not to mention their head coaches from the days in high school, former RRHS coach Dave Howes, now the Lobos’ safeties coach, and former CHS coach , the Lobos’ quarterback coach.)

Practices the final week could be moved to avoid practicing at the same time as UNM’s two basketball teams, which will be playing in the Mountain West Tournament.  All practices are open to the public and media.  Fans are asked to please keep space from the players and team due to COVID concerns, and for the Saturday practices, fans can sit and watch from inside the stadium.

The 2022 spring season will see several new faces, and some old faces in new places. As far as an old face in a new place, Jamie Christian has taken over for Jordan Somerville as running backs coach.  Christian, who moved around and helped with the offense while serving as Special Teams Coordinator, coached running backs at Fresno State. There he helped develop Ronnie Rivers and Jordan Mims, and he also recruited and coached UNLV’s Charles Williams, the all-time leading rusher for the Rebels.

The other old face in a new place is Jake Rothschiller, who moves from graduate assistant to linebackers coach.  The Lobo graduate has been associated with the program for the previous eight years, and he literally has gone from a “coach on the field” as staff members once referenced him as, to now a “coach off the field”.  His arrival frees up Rocky Long to oversee the entire defense while still lending a hand with the linebackers.

Rothschiller’s graduate assistant position is one of two openings that are now filled.  Trey Lomax, a four-year letter-winner and three-year starter at San Diego State will fill Rothschiller’s defensive graduate assistant spot.  On the offensive side of the ball, is another old face in a new place.  Byron Bell, who was originally recruited to UNM by Rocky Long and played from 2007-2010 at UNM and has since come back to earn his degree, will join the graduate assistant room, helping with the offensive line.  Bell excelled there both at UNM and in the pros.  Undrafted out of UNM, Bell earned a starting role as an undrafted free agent with Carolina, and that was the start of an 8-year NFL career in which Bell played in 102 games with 83 starts.  Overall, he played with Carolina, Dallas, Green Bay and Tennessee, retiring in 2019.

Of course, there are plenty of new faces on the playing roster as well.  Overall, there are 28 new faces on the 2022 spring roster that weren’t here in 2021, and 11 of those are new signees announced either in December or earlier this month. While fans no doubt will be wanting to put eyes on Miles Kendrick, a graduate transfer quarterback out of Kansas, he will be limited in practice.  He is one of four quarterbacks in camp joining Chavez, C.J. Montes and Connor Genal.

The Lobos will have 14 offensive linemen in camp, and while that group doesn’t have a ton of varsity letters among them (just three, two by Radson Jang who will be out as he recovers from surgery, and one for Isaak Gutierrez), the Lobos have plenty of redshirted players and newcomers that were newly signed to make the offensive line drills perhaps the mot competitive anywhere on the field.

The other slot that UNM will be looking at will be at kicker, as George Steinkamp, who opened 2020 as the kicker and has turned into one of the nation’s best kickoff men, will go against a pair of freshmen newcomers to see who replaces Andrew Shelley.

Defensively, the Lobos return tons of young talent including seven starters to a unit that continues to skyrocket up the defensive charts.  One key will be the return of Jerrick Reed II, who is a three-year starter and could climb into the UNM top-10 lists in interceptions this season.  Donte Martin, a junior, could also find himself in the career top 10 for passes broken up as well.

Runners shoot down the Bombers of Amarillo, 11-8 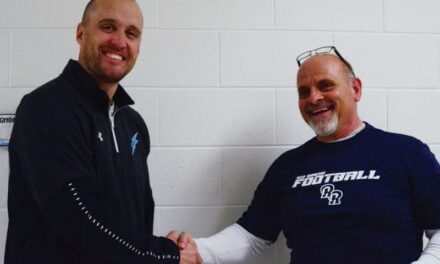